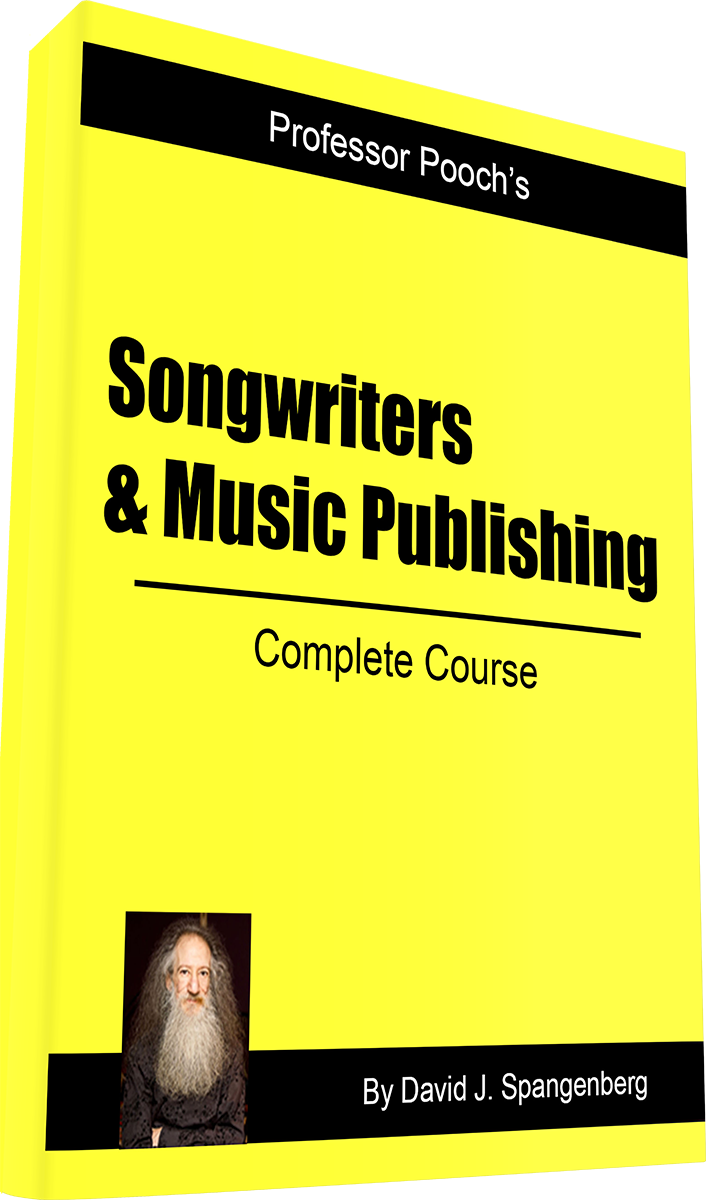 Listen to an Audio Sample

Learn at Your Own Pace!

Includes Sample Contract Between Songwriter & Publisher -
and How to Negotiate It!

This course shows you how to become a Successful...

If you wish to become a successful Songwriter [the Creative end], you should know how the Music Business operates and the correct steps to take, in the right order, to achieve that success, including possibly, the right Publisher [including yourself] to help you on your way.

Likewise, if you wish to become a successful Music Publisher [the Business end], you must choose the "right" Songs and Songwriters [including yourself], and know what steps to take for you to successfully help yourself move up the "Road to Success".

Simply put, the left hand must know what the right hand is doing [or should be doing] and each must know and understand the Music Business plus everything they can about the other side, if they wish to become successful on their side. Both "jobs" are very important, even if you're a Songwriter who is or wants to be their own Publisher.

No matter which way you want to do it, it's all here...

Upon completion of this course...

Sample Pages From The Course

Section 1: An Introduction to Music Publishing

Since the subject of Music Publishing is usually confusing let alone misunderstood by most people, it's important to spend the first lesson immediately painting a clear picture of what Music Publishing is, and then go into greater detail later on in the course.

When most people think of the word "Publishing", they think of "Books", and that a Publisher sells books. Well, at one time there were no records or tapes, let alone, CDs, MP3's, Videocassettes and DVDs. Originally, people received all their music in the form of Sheet Music, that is, printed documents that contained words and notes of Songs that allowed people to stand around a piano and sing with their friends and relatives.

Sheet Music still sells, (as well as Books of Sheet Music, known as "folios") but this is a very small part of one of the most profitable parts of the Music Business. Songwriters and Music Publishers also can make sizable amounts of money worldwide from:

Simply put, whenever a Song is performed, no matter who performs it, the Songwriter and Publisher could (should) benefit! It is also the Music Business' best-kept secret - how it is possible to sometimes make quite a lot of money, with very little time and effort.

By the end of this course, you will have all the pieces to the puzzle - how you can be a part of this very profitable segment of the Industry. Of course, you have to first understand what Music Publishing is and how that section of the Music Industry operates, so that you can become successful - without getting "ripped-off".

A little history of Music Publishing is necessary at this point. Before 1960, most people in the Industry, as a matter of course, went to Music Publishers for their Songs. The Publishers had Songwriters on staff as salaried employees, as well as other Songwriters constantly contributing Songs.

But since then, many Singers/Bands/Groups began writing their own Songs. That isn't to say that Artists, Managers and Record Producers don't go to Publishers looking for material, or that Publishing Companies can't still place Songs for Songwriters. They can and still do, but not as often as they used to.

Also with the advent of technology, many of the pure definitions of roles in the industry have changed: mainly the Songwriter, the Arranger, and the Producer. Nowadays, a single person can sit at a computer or computerized keyboard in their home studio, and write and/or arrange and/or produce Songs; not realizing which role(s) they are playing. Actually...

Regarding "Rap" music: Often I've noticed that the person doing the "Tracks" (see arrangement) is given credit as a writer. In actuality, the tracks person is not really a Writer, he/she is an Arranger, but as long as it's mutually agreed-to that they get credit as a co-Writer, then it's acceptable.

2.   "The Arrangement" (the "tracks"), what the instruments play and how they play it, includes...

(1).   The Volumes of the Instruments

(5).   Other Sounds (such as prerecorded Samples and Loops often used in Recordings nowadays)

... to achieve the final "Sound" you hear on a Recording.

It is important, and therefore I am including in this course, information for Songwriters who are also Singers and Group or Band Members.

Also, understanding Publishing is very important to their Managers, in that the Managers represent the Artist’s Songs as well as their recordings, and even may have a Publishing Company of their own. Also most Producers become involved with Publishing, in that Publishing is a rich source of income for them.

It is important to note, also, that packaging the Artist and Song together and selling them as one entity, has become a very important consideration to most Publishers - it makes the job much easier for them. They then don't have to search for an Artist willing to record the Song(s). They, in effect, have a "selfcontained package".

II.   What is a Music Publisher's Job?

Please click the "PayPal" Button below to take you to a highly encrypted, Safe and Secure Site

For those wishing to pay by check or money order...
[no cash, please!]